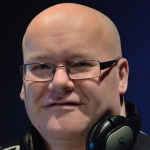 Red Thread - the show where every song is linked to the next one in some way!   Hi I’m Tim Cooper – Some of my links are very sensible, some are very tenuous, and some are insane! Whatever you expect to be the next song, it won’t be! I like to play songs not usually played on the radio too, you won’t hear the same old songs that other stations play.  The ‘older’ hour features music from the 50’s to around 1985, and ‘newer’ hour its 1985 to the present day.

The title of the show by the way comes from an ancient Chinese belief which states that there is an invisible red thread that connects each of us to all of the individuals who have been, currently are, and will in the future be important to us in our lives.  This red thread can stretch, twist, and bend… but will never break.

Catch me on Thornbury Radio every Sunday at 3pm, and again on Wednesday evenings at 6pm